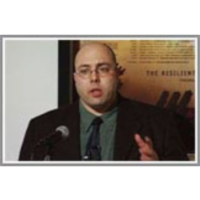 This video was recorded at MIT World Series: The Resilient City: Trauma, Recovery and Remembrance. September 11th and the City Ralph Waldo Emerson once wrote "The test of civilization is the power of drawing the most benefit out of cities." The test of terrorism, then, may well be the power to inflict the greatest harm to those same centers of culture, commerce, and exchange. This is something that the September 11 terrorists well understood. Mohamed Atta was a man well acquainted with the power and majesty of cities--and presumably their durability and resilience. He was trained as an engineer, architect and urban planner. Yet, warped by fundamentalism, Atta became the "perverted dreamer" that E. B. White imagined decades ago in Here is New York, a man who would "loose the lightning" on Manhattan and attempt to destroy it, symbolically and literally. And even as the rubble of the World Trade Center smoldered in the days and weeks following September 11, pundits in the United States, too, foretold of the death of downtown and the end of the city as we know it. But cities have endured trauma and violence for millennia, much of it far worse than that unleashed by Mohamed Atta on September 11. Any study of the city in history will reveal that human settlements possess an essential ability to resurrect themselves in the wake of devastation, a point that the Resilient City colloquium hopes to reaffirm. Urban Trauma and the Resilience of Cities This paper examines the near-ubiquity of urban resilience by analyzing the concepts of trauma, recovery, and remembrance. It questions the definition of "resilience," by exploring the relationship between recovery of the built environment and other ways that a "return to normalcy" may be measured. Urban trauma, like urban resilience, takes many forms, and can be categorized in many ways. First, there is the scale of destruction-which may range from a small single precinct to an entire city (or, potentially, an even larger area). Second, one may rank these traumas in terms of their human toll, as measured by deaths and disruption of lives. Third, one may organize these destructive acts according to their presumed cause-some result from the largely-uncontrollable forces of nature, such as earthquakes and floods; others are hybrids of natural forces and human action, such as fires; while still others result more wholly from deliberate human will, whether executed by conquering armies, aerial bombardment, or terrorist strikes. It is not enough to ask general questions about urban recovery; we must ask who recovers which aspects of the city, and by what mechanisms. The process of post-disaster recovery is a window into the power structure of the society that has been stricken. Similarly, to ask about remembrance is to inquire how what is remembered gets constructed, when, and by whom.

You just viewed September 11th and the City / Urban.... Please take a moment to rate this material.
Rate