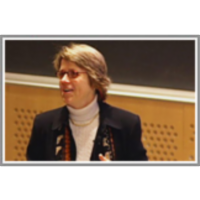 This video was recorded at MIT World Series: Uncommon | In common. "The Multidisciplinary Forest of MIT: From Twigs to Canopy" MIT's 19th century founders stunningly anticipated the 20th century convergence of science and technology, Rosalind Williams notes, with their emphasis on knowledge of both natural laws and applied engineering. The connection between the two different disciplines, says Williams, was "something new in history." Scientific understanding had previously been "aristocratic, elitist, intellectual, and…speculative." Technology had been "more lower class, empirical and action-oriented." MIT's approach was to meld engineering with pure science, and then, after World War 2, to broaden engineering by connecting with the social sciences. Today, MIT has become a "pioneer in deep 'multidisciplinarity'," says Williams, enabled to address key human problems involving science, technology and society. "Marine Microbes: Tiny Cells, Global Impact" Please don't confuse Penny Chisholm's beloved Prochlorococcus, (a marine microbe) with your run of the mill bacterium, or worse, with some dreaded pathogen. This species of phytoplankton, discovered in 1985, turns out to be a biological superstar. As Chisholm says, "My organism is extremely important." Prochlorococcus, existing in abundance in much of the world's oceans, is a remarkable biological pump. It and fellow phytoplankton suck up carbon dioxide from the atmosphere, and engage in "almost as much photosynthesis as trees and plants on land," says Chisholm. We must begin to look at the sea "as teaming with information," remarks Chisholm, with microbes "shaping the composition of the atmosphere, seawater and habitability of the earth itself." "Tiny Crystals: The Path From Science to Technology" Trial and error played a large role in the evolution of Moungi Bawendi's field, which emerged from research in different disciplines: the search for solar energy during the energy crisis of the 1970s; making smaller semiconductors; constructing lasers for products like CD players. Physical chemists, manipulating tiny particles in different solutions, saw them grow "like snowflakes" into different shapes, says Bawendi. Some of these particles emitted different colors of light. Researchers developed fluorescent microspheres, particles made out of silica, that emit specific colors. Today these tiny balls can be used to image blood flow to detect leaks in tumor walls. Apply a current and the balls go in different directions. "These are the kinds of discoveries that grad students stumble on if they work late at night," says Bawendi. Nanocrystal quantum dot lasers make "beautiful colors for computers," and biologists can use these quantum dots for color coding DNA chains in gene assays and possibly for biomedical imaging in living organisms. "Big Iron to Little Silicon" After a poetic tribute to his colleagues, Alex Slocum performs what he calls "a high speed download." He speaks of the different paths to invention, from sitting at a CAD station, to heading off for a mountain hike. He sketches the idea of a "nanotube spinneret, analogous to a showerhead." Slocum's goal "is to wear the first Hawaiian shirt made from nanotubes." Slocum's work is living proof of his motto: "Science doesn't have to be boring." He designs "stuff from silicon wafers to bottles," to lighter wind turbines and nodes for pool noodles. Slocum views the design process as a way to have fun with math—an approach he'd dearly like to promulgate. He's pursuing an educational system for grade schools that aims to teach "systematic thinking and the scientific method" using rhymes, bath songs and computer animations.

Interdisciplinary Research at MIT: Making Uncommon Connections is categorized in the following disciplines:

Other materials like Interdisciplinary Research at MIT: Making Uncommon Connections

You just viewed Interdisciplinary Research at MIT:.... Please take a moment to rate this material.
Rate