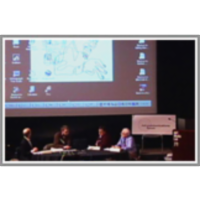 This video was recorded at MIT Communications Forum. There's a lot that seems familiar on TV in other countries, and indeed, as these panelists recount, there's been a flow across borders of TV content and style nearly as long as the medium's been around. William Uricchio tells us that although TV technology developed "as a genuinely global phenomenon," in Stalin's Russia, Nazi Germany and in the USA, after World War II, TV became synonymous with American culture. This was no accident, says Uricchio, since it was pushed by the USIA as an American invention "to combat Communism and to help civilize and conquer the world, make it an American marketplace." Over time, this influence has broadened as a result of direct program sales (Germans went crazy for Dallas); the model of American production techniques and job categories; copying and then licensing actual TV formats; and the pressure on the more public-minded European broadcast networks to make a space for fast-paced, hard-driving, American-style programming. Uricchio finds it fascinating when formats "work across cultures," because they become "a real metric for trying to understand culture specificity." Roberta Pearson has followed the impact of U.S. television in Britain. At first, the BBC was the only game in town, but commercial television jumped into the game in 1955, full of American content that was perceived as dumbed down and vulgar. Today, that perception has largely been reversed, and U.S. shows are widely admired in Britain. They've "gone from a situation where American TV used to represent the worst in popular culture to where it now represents the best, and the Brits know they can't compete," says Pearson. So central is American content that two major organizations, Sky TV and Virgin Media, have been waging mortal combat around the rights to American shows like Lost. Many of this country's most familiar programs, ones we might identify as uniquely American, derive from much older European versions, says Eggo Muller. In the case of America's Most Wanted for example, pride of origin goes not to the U.S., nor even to the U.K. but to Germany for a show that first appeared in 1967. Muller makes the case that for the first time, the U.S. faces serious competition from Europe in TV production, specifically the export of reality TV formats, in Muller's words, "the pornography of everyday life." He describes the increasingly sophisticated trade in these formats – actual brands – which often involves copyrighted production elements (like computer graphics) and a senior producer who assures that the program is reproduced according to a series bible. Nevertheless, versions of Survivor and Big Brother among others, manage to soak up a specific country's ambience. The stories in the shows are totally different from one culture to the next, says Muller, as are the kinds of hosts, languages, "national sense of humor, national sense of how you should address those who are voted out, and how to care about them."