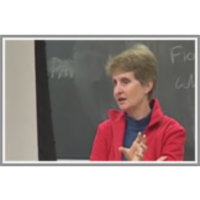 This video was recorded at Center for Language and Speech Processing (CLSP) Seminar Series. Traditionally, linguistic variation within different time scales has been the province of different disciplines, each with a distinctive suite of techniques for obtaining and analyzing data. For example, historical linguistics, sociolinguistics and corpus linguistics study variation between different speaker groups over historical time and across space, while psycholinguistics, phonetics, and computational speech recognition and synthesis study the dynamics of producing and comprehending language in the individual on a scale of milliseconds. Yet there is evidence that linguistic variation at these different time scales is linked, even in the domain of higher-level syntactic choices. This is a primary finding in the present study of dative constructions, illustrated by (1a,b), in Australian and American English. 1a) Who gave you that wonderful watch? (V NP NP) b) Who gave that wonderful watch to you? (V NP PP) We use a very accurate multilevel probabilistic model of corpus dative productions (Bresnan, Cueni, Nikitina, and Baayen 2007) to measure the predictive capacities of both American and Australian subjects in three pairs of parallel psycholinguistic experiments involving sentence ratings (Bresnan 2007), decision latencies during reading (Ford 1983), and sentence completion. The experimental items were all sampled together with their contexts from the database of corpus datives, stratified by corpus model probabilities. We find that the Australian subjects share with the American subjects a sensitivity to corpus probabilities. But they also show covarying differences, notably a stronger end-weight effect of the recipient in the ratings task and the absence of a dependency-length effect of the theme argument in the decision latency task (cf. Grodner and Gibson 2005). A unifying explanation for these differences is that decision latencies for `to' are reduced and naturalness ratings are increased when a PP is consistent with expectation. The Australian group would then be predicted to have a higher expectation of PP than the US group. This prediction is borne out by the sentence completion tasks, which showed that the Australians produced NP PP completions more than the American subjects in the same contexts. These findings suggest that subtle variations in the experiences of the dative construction by historically and spatially divergent speaker groups can create measurable differences in internalized expectations in individuals at the millisecond level. Bresnan, Joan, Anna Cueni, Tatiana Nikitina, and R. Harald Baayen. 2007. Predicting the dative alternation. In Cognitive Foundations of Interpretation, ed. by G. Boume, I. Kraemer, and J. Zwarts. Amsterdam: Royal Netherlands Academy of Science, pp. 69--94. Bresnan, Joan. 2007. Is syntactic knowledge probabilistic? Experiments with the English dative alternation. In Roots: Linguistics in search of its evidential base. Series: Studies in Generative Grammar_, ed. by Sam Featherston and Wolfgang Sternefeld, pp. 75--96. Berlin: Mouton de Gruyter. Ford. Marilyn. 1983. A method for obtaining measures of local parsing complexity throughout sentences. Journal of Verbal Learning and Verbal Behavior, 22: 203--218.

Other materials like Predicting Syntax: Processing Dative Constructions in American and Australian Varieties of English