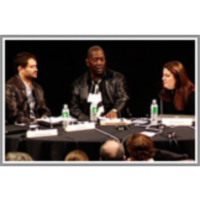 This video was recorded at MIT Communications Forum. If you are sufficiently new media literate, you might recognize this panel as a mash-up, combining but not homogenizing five distinctive interpretations of "remixing." Each contributor has a unique project example to share, but in the end there is some convergence: remixing enables participation, and thus encourages creativity, ownership, and collaboration – the three attributes of contemporary digital culture celebrated in this edition of the annual Media in Transition conference. One approach to learning through remixing is to provide tools that will expose the structure of media products, making it accessible to all. Modest digital editing, for example, allows a Star Trek fan to combine scattered "warp drive" commands into a countdown sequence: "Ahead warp 10! Go to warp 9! ..." With more sophisticated software, you can hop back and forth, in sync, between book and movie versions of Fellowship of the Ring, or even between two different film productions of Romeo and Juliet. Erik Blankinship and the Media Modifications group will soon unveil such tools on the Web at adapt.tv. By remixing PacMan in their own voice, Juan Devis' Latino students created a new video game, El Immingrante, about cleaning up their Los Angeles neighborhood while staying one step ahead of a pursuing vigilante enforcer. Reaching several rungs higher up on the cultural hierarchy, their new source is Huckleberry Finn, which they are adapting to 21st century LA in a game that aims to teach American history and civics. Renee Hobbs, a longtime developer of media literacy curricula, sees remixing as a powerful way to highlight the "constructedness" of media content, and thus to reveal the plasticity of meaning. She has developed a suite of games that a girl can play to create her own song, by choosing a message, musical genre, set of lyrics, voice effects, and even designing a custom avatar to perform it. My Pop Studio, available on the Web since mid-2006, helps girls understand how music evokes an emotional response, while giving them the pleasure and sense of power that comes from manipulating familiar materials. In yet another medium, theater, Ricardo Pitts-Wiley exploits remixing to make literacy more inclusive. He's adopted quite a challenge: to make more compelling for young people, while preserving the integrity of the novel. For example, children don't necessarily identify with a white whale, but they do understand "the vengeful pursuit of something that has hurt you," when the white nemesis is translated into cocaine. Ultimately it takes a community to sustain literacy, and Pitts-Wiley hopes theater can enlist widespread interest and support, much as the Bible used to provide a shared literary resource for all races and classes of people in the West. The academic study of new media literacy, a specialty of MIT's Comparative Media Studies program, is now the center of a MacArthur Foundation-funded project. CMS fellow Alice Robison describes this effort to examine "what happens in the space in between you making meaning and me making meaning." The New Media Literacies project has created video "exemplars" of topics such as remixing and DJ culture for use in schools.

Learning Through Remixing is categorized in the following disciplines:

Disciplines with similar materials as Learning Through Remixing

You just viewed Learning Through Remixing. Please take a moment to rate this material.
Rate