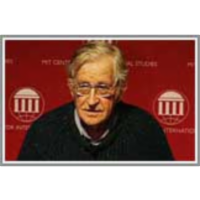 This video was recorded at MIT World Series - Starr Forum. While he admits to no surprise about events in Gaza, Noam Chomsky does consider "the latest U.S.-Israeli attack on helpless Palestinians" a step beyond terrorism and aggression. He says "some new term is needed for the sadistic and cowardly torture of people caged with no possibility of escape, being pounded daily by the most sophisticated products of U.S. military technology." Chomsky says these "new crimes" don't fit easily into any standard category except for "familiarity," and his talk recaps the history of Israeli relations with Palestinians in Gaza and elsewhere. He notes that while many are engaged in "sober debate on what the attackers hope to achieve," he doesn't find Israeli motives at all "obscure." Chomsky says "rational Israeli hard-liners" decided it was senseless to subsidize the illegal Israeli settlement of Gaza in 2005, which would have required significant resources. Instead, they decided to back settlement of the West Bank, a more valuable territory, with its arable land and water supplies. The intent of this criminal annexation is "a vastly expanded Jerusalem." Says Chomsky, "It made more sense to turn Gaza into the world's largest prison, and let people rot." Upcoming elections influenced the timing of the Gaza invasion, he continues. Ehud Barak was lagging badly in the polls, and an attack in the name of defending Israel against Hamas rockets was calculated to buy Barak parliamentary seats, says Chomsky. And while every state has a right to defend itself against criminal attacks, there's "a matter of choice of action in the first place, proportional or not. Any resort to force always carries a heavy burden of proof." Israel surely has a "peaceful alternative to the use of force on its territory," says Chomsky: It could accept a ceasefire. Chomsky recites a litany of examples of Israeli and U.S. hypocrisy in action and policy around Israel's claimed desire for peace. "Of course it wants peace, everyone wants peace. Hitler wanted peace, for example. The question is, on what terms." Going back to the earliest days of the Zionist movement, it was clear that Israel wanted to delay a political settlement, "while building facts on the ground." Says Chomsky, "Today Israel could have security, and normalization of relations and integration into the region, but it clearly prefers illegal expansion, conflict, repeated exercise of violence, to teach lessons to the 'two-legged beasts,' actions that are severely eroding its security even if it gains short-term military victory." He concludes, "We're observing a rare moment in history: politicide, the murder of a nation at our hands."

Chomsky on Gaza is categorized in the following disciplines:

Disciplines with similar materials as Chomsky on Gaza

You just viewed Chomsky on Gaza. Please take a moment to rate this material.
Rate