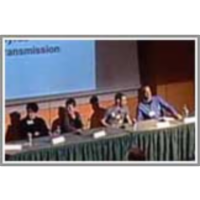 This video was recorded at MIT Communications Forum. As old media die, new forms are emerging, but it's not clear they will serve such vital civic functions as "helping people form publics," as Pat Aufderheide puts it. These panelists point to promising experiments in "Public Media 2.0," but caution that new media are not guaranteed to shore up democracy or invigorate public culture. After two years of research, Jessica Clark has reframed the notion of public media as "outlets that provide context/content that allows publics to form around shared issues without political or corporate interference." Instead of a centralized producer (old media), user-producers collaborate, forming networks with the use of digital tools. Some novel ventures that "break out of the old zones:" cell phone reporting in forbidden areas of war-torn Gaza, and streaming iPhone feeds of local news from U.S. cities. Ellen Hume faults traditional journalism to some degree for its own demise, because it did not "connect the dots between news and action." It stirred up emotions with stories but didn't give people "a place to go" with their passion. In contrast, new civic medium SeeClickFix.com enables the public to report a problem in a community (from potholes to graffiti), spurring government response. HeroReports.org encourages people to report instances of kindness. Says Hume, "These new media offer enormous opportunity for creativity, and unleash the ability to participate in public." But we haven't yet entered the era of full media literacy, where people become "part of the public, rather than cruising through." Persephone Miel has been searching for "all that democracy we were supposed to get." In spite of the proliferation of new types of reporting media, including news aggregator, author- and audience-driven web sites, Miel believes the "old media model still does unique things for us." As traditional journalism fades, there's no new media replacement yet for its "editorial intelligence," its persistent, watchdog functions. Miel sees no evidence that "the volunteer energy of the blogosphere" will step into these roles. She notes several attempts at hybrid journalism forms: websites Spot.us, a nonprofit project for community-funded reporting; Global Voices, where correspondents in developing nations send out web dispatches; and Town Meeting 2009, a New Hampshire public radio web venture that reported on local governments' budget process. On the technology front, Dean Jansen has developed a free open source HD video player, Miro, so people don't have to go through proprietary gateways or load specialized software to access web video content. He hopes to swell the ranks of user-producers in a more inclusive, participatory webspace. Jake Shapiro's public radio exchange, PRX.org, invites independent radio producers to connect with local public radio stations through his aggregating site. Citing the "current collapse of traditional forms," particularly public television, Shapiro hopes to reconfigure public broadcasting. He says his marketplace enables content creators to find an audience, receive royalties from interested public radio buyers, create social networks, and potentially find alternative channels of distribution via podcasting.