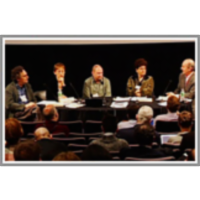 Copyright, Fair Use, and the Cultural Commons

This video was recorded at MIT Communications Forum. Moderator William Uricchio sets the scene for panelists' discussion of current copyright wars with a brief historical overview of copyright protection. In 1790, when news traveled by horse and carriage, copyright protection was good for 14 years. Today, when a digital, networked society enables instant transmission of data, protection lasts 70-plus years. Uricchio notes, "Bizarrely, the faster information circulates, the longer we're extending copyright protection. It seems totally at odds with where our constitution framers and case law emerged from." Copyright came into being not just as a way of protecting authors' rights, says Wendy Gordon, but as a set of liberties for the public as well. Yet exercising those liberties—especially in an age of corporate oversight of content—requires serious means. She says, "Our free speech guarantees are often not utilized to the fullest. It always seems easy to choose the second best word rather than get sued or arrested by saying exactly what you think." The more licensing of material, the more companies insist on licensing, and judicial decisions follow. Gordon's recommendation for the small player is "coalitions, courage and new customs." Gordon Quinn was part of a filmmakers' group that decided to challenge corporations and assert their right to fair use. (Definition: legally quoting somebody else's copyrighted music, pictures or words without paying or asking permission – if it benefits society more than it hurts the copyright holder). He has practiced self censorship out of fear of lawsuits, in one case dropping a scene of immigrants singing "Happy Birthday" in Spanish because it would have involved a significant clearance payment. To his films' detriment, Quinn often eliminated or edited around questionable copyright content. Pat Aufderheide (who speaks last in this panel) describes how her group, the Center for Social Media, helped organize filmmakers to challenge, by action and by persuasion, the standards established by music, motion picture and publishing industries around copyright. She discovered remarkable consensus among artists about what constituted reasonable use of preexisting, copyrighted material, including quoting for critique, quoting pop culture to make a point, capturing incidental material and using historical material to make points. With the resulting handbook, the Documentary Filmmakers' Statement of Best Practices in Fair Use, filmmakers began to invoke their own guidelines. Today, after 18 months, says Aufderheide, major U.S. film insurers have begun to accept fair use claims. Hal Abelson offers his sense of how copyright concerns constrict life at the academy. MIT, he says, has begun putting fences up around its own course materials, including the most basic and central of thinkers. For instance, it has limited online, published versions of Aristotle, Pascal and Fermat to students in a particular course, for a single semester. Huge expense goes into getting permissions from faculty, and university lawyers are so concerned about offending copyright holders that they bar reams of material from MIT's OpenCourseWare site. Abelson believes these fences risk "destroying the university as an intellectual community," and recommends using open content (granting Creative Commons licenses) as much as possible, as well as aggressively exercising fair use.

Disciplines with similar materials as Copyright, Fair Use, and the Cultural Commons

Other materials like Copyright, Fair Use, and the Cultural Commons

You just viewed Copyright, Fair Use, and the Cultural.... Please take a moment to rate this material.
Rate