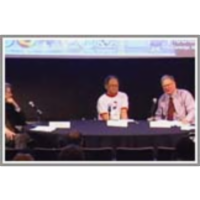 This video was recorded at MIT Communications Forum. In a panel that at times resembles a late-night ramble and conversation, three film music professionals discuss changes in their industry, with some no-holds-barred dishing and kvetching. Martin Marks sets the scene historically, starting with the revolutionary introduction of sound to film. He plays a clip from the original 1933 film King Kong, which he describes as both a technological and aesthetic landmark of soundtrack production. Paul Chihara continues the story, explaining that the score's creator, Max Steiner, was part of the first wave of film composers, classically trained musicians, fleeing Hitler's Germany. Steiner drew on the music he knew best, the kind performed by the Vienna Staatsoper, for his King Kong score, so we get a movie that's "wall to wall music, filled with leitmotifs," played by a giant orchestra. Cut to 2005, and the Peter Jackson remake of King Kong. In what he describes as "an electro-acoustic seminar on how digitally sound is enhanced," Chihara plays several clips of the same scene that demonstrate the evolutionary leap in soundtrack scoring since 1933. The process involves the demo track, a score with digital sampling and no acoustic instruments intended to help the filmmaker imagine how music will work with the film; next an acoustic score; and the final dub version, where acoustic and digital music sources combine, and the rest of the sound elements are added in post production (dialogue and sound effects). The new scoring process can prove dangerous to composers, as Dan Carlin reveals. "We have a term called 'demo love,' describing how the director gets attached to the very first track offered by the composer." This is a digitally sampled score often drawn from other composers' work. The editor and director become accustomed to it, and test audiences watch films with demo tracks. "So the composer comes in with a new approach, and often gets fired at this point." This has led to composers fearful of originality. Carlin says starting in the '90s, generic romantic and action scores began to emerge: "Everything starts to sound alike." He also describes how composer Georges Delerue went to see Steven Spielberg's The Color Purple, and heard one of his own themes, which had started as a temporary music cue but then was essentially plagiarized. This led to a very lucrative law suit. Marks notes that "one of America's film music geniuses," Elmer Bernstein, essentially dropped out of the business because of the insistence on demo tracks over original music. Panelists also bemoan the demise of orchestral recording sessions at production studios, as digital audio tools put the composer's work in the hands of directors and editors, who play with increasingly authentic sounding software-based instruments. Companies are buying up the rights to the sounds of famous symphony orchestras, down to the staccato and legato notes of strings and horns in different keys and pitches. The craft involved in composing music, then conducting an orchestra through a movie scene, has become obsolete. Chihara concludes sadly, "It's an unnecessary art."

Film Music and Digital Media is categorized in the following disciplines:

Disciplines with similar materials as Film Music and Digital Media