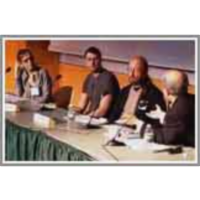 This video was recorded at MIT World Series: Media in Transition 6: Stone and Papyrus, Storage and Transmission. European archivists grapple with the legal obligations, civic responsibilities and future prospects of their collections, which, thanks to the Internet and other new technologies, are increasingly awash in image and sound. As William Urichhio notes, "tradition-bound institutions know what we should be gathering: feature films, books, newspapers, political documents, but it's much harder to know what to do with things like social media…say, networks of interactions." Different organizations are evolving diverse strategies. At France's National Institute of the Audiovisual (INA), Claude Mussou describes managing "memory and heritage policies in the information age." In the 16th century, she recounts, Francois 1 mandated that any book published would be first deposited in the royal library. The national collection law broadened over centuries to include new forms of knowledge production: documents, film, radio and TV, and beginning in 2006, websites, because of the migration of so many activities online, and because of the fleeting life of many websites. Says Mussou, "Twenty, 50 or 100 years from now, when scholars or academics look for evidence and testimony for what the 21st century was,…web archives will be a necessary and valuable source." She pointedly notes that we can't rely on Google or other commercial interests to maintain web archives, and therefore governments must not "surrender their role as gatekeepers to collective memory." Sweden's national library recently merged with the national media archive, says Pelle Snickars, which includes seven million hours of media material. The legal deposit law mandates anything put out on tape, radio or TV must find its way into the state's collections. This imposes an enormous burden, both curatorial and budgetary. As it transitions to digital, the library must maintain its analog collection. Snickars says the larger problem involves rights: researchers would love access via the web to the material that's being transferred, but the material belongs to others. Snickars worries about the best methods for digital preservation, and whether quality concerns should be sacrificed to quantity demands, as more and more people assume access to information online. The BBC boasts 100 kilometers of shelves for its A/V collection, says Richard Wright, from 1920s radio to videotape from the 1960s onward -- all of which must be digitized to be preserved. The BBC is converting 200 terabytes per week of current broadcast material -- an enormous commitment to digital. As Wright points out, "We're putting a very big egg in that basket, and the basket is not perfect." The risk of loss of data is proportional to the data stored, and since so much is pouring from analog to digital, "the risk is growing by Moore's Law." One way to mitigate this loss: avoid compressing data, and seek redundancy. As we've moved from stone, to paper, and onto disc, storage capacity gets denser and cheaper, he notes -- almost overwhelming: "It's why our grandchildren are swimming in a sea of digital photos." If we can't tag all this material appropriately, it will be "struggling to survive" for future generations.

Institutional Perspectives on Storage is categorized in the following disciplines:

Disciplines with similar materials as Institutional Perspectives on Storage

You just viewed Institutional Perspectives on Storage. Please take a moment to rate this material.
Rate