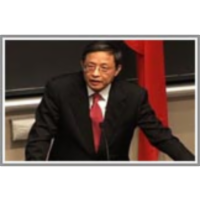 This video was recorded at MIT World: One Host Fits All. MIT President Susan Hockfield hails a new era of collaboration between the Institute and China, and Zhou Wenzhong, Ambassador Extraordinary and Plenipotentiary of the People's Republic of China, discusses the larger relationship between his country and the U.S., particularly in light of the economic crisis enveloping the world. Chinese students have been matriculating at MIT, says Susan Hockfield, since 1876 -- almost as long as the university has been around. But the 1990s saw the start of a broader and deeper institutional commitment, with Mandarin courses at MIT, and a program to send MIT students to intern with Chinese companies. Now, the relationship is deepening, with an MIT-China initiative to spark research ideas and collaborations, particularly around energy and sustainable development, robotics, and healthcare; and a China Forum Lecture series. Hockfield believes partnerships between MIT and the People's Republic of China "are virtually unlimited." In the 30 years since China began economic reforms, Zhou Wenzhong recounts, its domestic economy has grown roughly twice as fast as the world economy. Its GDP has expanded from the equivalent of $216.5 billion to $3.28 trillion. The ambassador reminds his audience that in spite of such gains, China remains a developing country, with an enormous population whose per capita GDP is less than 1/17th of that of U.S. citizens'. It is "a long way from basic modernization and prosperity for all." Much of China's growth stems from a quadrupling of international trade. But intense globalization, an "irresistible reality" for all nations, poses major challenges, especially now with the rapid onset of profound economic malaise. China is moving to respond to this crisis, and looking beyond it, to help "establish a new international financial order that is fair, just, inclusive and orderly, fostering an institutional environment conducive to sound global economic development." The government has set out a comprehensive package of reforms to keep the country's economy running in hard times. The remedy, loaded as it is with tax cuts, social investments, restructuring of major industries, and energy conservation measures, may ring a bell for the U.S. public. China also looks to its global neighbors in facing the immediate economic challenge, says Zhou Wenzhong, and in responding to such other pressures as terrorism, proliferation of WMD, climate change, epidemic diseases and national disasters. He hopes for a strengthening of U.S.-China relations, predicated on an approach steeped in the "long-term and strategic perspective." The U.S. and China should "shoulder greater shared responsibilities," promote common interests in trade, counterterrorism, law enforcement, science, technology and young people. China asks that the U.S. treat it as an equal, and respect such core interests "as the Taiwan question and Tibet relation matters." With mutual trust and dialog, he concludes, "A new era offers unprecedented opportunities…to build a better future."

Disciplines with similar materials as China's Development and China-U.S. Relations

You just viewed China's Development and China-U.S..... Please take a moment to rate this material.
Rate